ADULTRY – NOT A CRIMINAL OFFENCE ANYMORE; CAN BE GROUND FOR DIVORCE, SEC.497 IPC AFFECTS THE RIGHT TO LIFE: SC 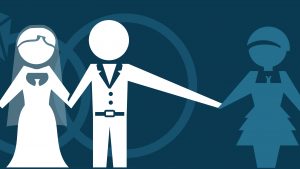 According to the adultery law, a man can be punished for having a sexual relationship with a married woman without the consent of her husband. The petitioners want Section 497 of the IPC to be made gender neutral. In India, adultery is a crime and the punishment for the same can be imprisonment for five years, or fine, or both.

Calling the law archaic and saying that it violates Articles 14 and 21 of the Indian Constitution the justices said that: “Adultery can be ground for civil issues including dissolution of marriage but it cannot be a criminal offence.”

The constitutionality of the Section was challenged for the first time in 1954. However, the scope of challenge was limited then, as it was based on the exclusion of women from punishment. But it was upheld by the Supreme Court in 1954 in Yusuf Abdul Aziz v State of Bombay, holding that the it was a beneficial provision for women as per Article 15(3) of the Constitution of India.

This instance of Justice Chandrachud overruling father’s judgment is happening for the second time. The first occasion was in the privacy judgment, when Justice D.Y.Chandrachud held that the judgments rendered by all the four judges including his his father constituting the majority in ADM Jabalpur were seriously flawed.

Almost the very same arguments as in Joseph Shine were raised in Sowmithri Vishnu against Section 497 -(1) it confers upon the husband the right to prosecute the adulterer but, it does not confer any right upon the wife to prosecute the woman with who whom her husband has committed adultery; (2) it does not confer any right on the wife to prosecute the husband who has committed adultery with another woman; and, (3) it does not take in cases where the husband has sexual relations with an unmarried woman, with the result that husbands have, as it were, a free licence under the law to have extra-marital relationship with unmarried women; and (4)the section is a kind of ‘Romantic Paternalism’, which stems from the assumption that women, like Chattels, are the property of men.

However, these arguments were dismissed by Justice Y V Chandrachud. He described them as “have a strong emotive appeal but they have no valid legal basis to rest upon”. It was held that a penal provision cannot be held unconstitutional merely because it punishes man alone. “It is commonly accepted that it is the man who is the seducer and not the woman”, he observed in the judgment, endorsing the general impression which shaped the provision in that manner.

The second argument was dismissed holding, “No grievance can then be made that the section does not allow the wife to prosecute the husband for adultery. The contemplation of the law, evidently, is that the wife, who is involved in an illicit relationship with another man, is a victim and not the author of the crime”. He also observed that “the offence of adultery as defined in that section can only be committed by a man, not by a woman“, echoing the prejudice that woman is always a victim in a adultery as she lacks agency to be a willing participant in it.

The third argument was dismissed observing that the section was concerned with dealing with the evil of “a man seducing the wife of another”, and that a provision cannot be declared unconstitutional for under-inclusion.

The Section -which was twice upheld earlier, in 1954 & 1985- has been now invalidated by the SC, in tune with the expanding horizons of individual liberty and gender parity. This also showst that the SC will not remain a passive prisoner to its to its earlier judgments.