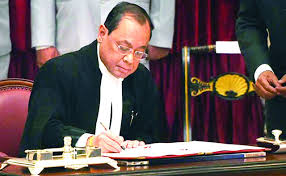 The Chief Justice of India, Justice Ranjan Gogoi is the first person from the Northeast to claim a top position at the judiciary. President Ram Nath Kovind appointed Justice Gogoi as the 46th CJI and is set to assume office on October 3. His tenure will end next year in November.

Earlier this year, Supreme Court’s four topmost judges, in an unprecedented move, called on a press conference to address issues relating to the allocation of cases in the top court, which included Justice Gogoi, Justices J Chelameswar (since retired), Madan B Lokur and Kurian Joseph.

In his tenure as a senior judge of the apex court, Justice Gogoi delivered significant judgments including Assam’s National Register of Citizens (NRC), setting up of special courts to exclusively try MPs and MLAs, Rajiv Gandhi assassination case convicts for the remission of their life sentences and appointment of anti-corruption ombudsman Lokpal among others.