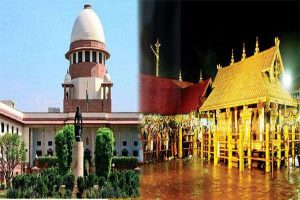 The Supreme Court has delivered one of the most keenly awaited judgment in Sabarimala case. by a 4:1 majority, the Court has permitted entry of women of all age groups to the Sabarimala temple, holding that ‘devotion cannot be subjected to gender discrimination’.

The lone woman in the bench, Justice Indu Malhotra, dissented.

“Women is not lesser or inferior to man. Patriarchy of religion cannot be permitted to trump over faith.Biological or physiological reasons cannot be accepted in freedom for faith Religion is basically way of life however certain practices create incongruities“, the Chief Justice read out portions of the judgment written for himself and Justice A M Khanwilkar.

The judgment of the CJI also held that Ayyappa devotees will not constitute a separate religious denomination. Rule 3(b) of the Kerala Hindu Places of Public Worship(Authorization of Entry) Rules 1965, which prohibited entry of women in Sabarimala, was also struck down as unconstitutional.

The separate but concurring opinion of Justice Nariman held : “Anything destructive of individuality is anachronistic of Constitutionality. To treat women as lesser people blinks at the Constitution itself”. It was held that Ayyappas do not constitute a separate religious denomination.

Justice Chandrachud in his separate but concurring opinion held that the idea behind the ban was that presence of women will disturb celibacy, and that was placing burden of men’s celibacy on women. This stigmatises and stereotypes women, he observed.

Justice Indu Malhotra, in her lone dissent, held that issues of deep religious sentiments should not be ordinarily be interfered by the Court.Court should not interfere unless if there is any aggrieved person from that section or religion. Notion of rationality should not be seen in matters of religion. She also held that shrine and the deity is protected by Article 25 of Constitution of India.