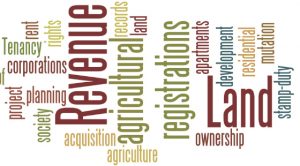 Constitution of India – Art. 226 – Bombay Land Revenue Code, 1879 – S. 65 – Letter Patent Appeal – Ld. Single Judge passed order to appellant to convert land for non-agriculture use for respondent –whether justified – appeal – held, appellant had no right to issue land for non-agriculture use – S. 65 would be helpful to grant permission to issue land for non agriculture use but with certain conditions and provisions of law – S. 65 granted powers of administrative and executive nature to collector which was delegated into District Panchayat and Taluka Panchayat – so when district panchayat and Taluka Panchayat exercised this power vested in it wasfull of acted in good faith and within powers vested in it in case of Council of Civil Service Union v. Minister for Civil Service, three grounds were mentioned on which an administrative wing was controlled by judicial review, was (i) illegality (ii) irrationality and (iii) procedural impropriety – S. 65 could not give any right to any person to convert agriculture land for non agriculture use – there was water body beside the land so difficult to grant permission to use land for non agriculture use – plans represented by respondent could not get approval – regarding order passed by Ld. Single Judge, court had to see parameters of judicial review – court was restrained to see legality – it was not issue to decide that decision was right or wrong but concerned only with which decision was taken – Ld. Single Judge committed grave error in his conclusion that appellant had passed order with malicious intention to harass respondent 1 – order passed by Ld. Single Judge quashed and set aside – appeal allowed. [PARA-27, 28]

Bombay Land Revenue Code, 1879 (5 of 1879) – Secs. 135B, 135C, 135D & 135L – Gujarat Land Revenue Rules, 1972 – Rule 108 – In proceeding relating to entries in village record, the authorities determined question of title to the proceedings by holding that the lands were not of Service Inams, but of private ownership – Such determination or even examination of title was beyond the scope of R.T.S. proceedings – Held, the learned Single Judge had rightly affirmed the order of the Principal Secretary setting aside the finding of the lower authorities – Decision of the learned Single Judge, affirmed.[PARA-17, 27]

Bombay Land Revenue Code, 1879 (5 of 1879) – Secs. 135B, 135C, 135D & 135L – Entries in village record – In R.T.S. proceedings, revenue authorities are not empowered to adjudicate questions of title – It is only the Civil Court that can decide such rights and give a declaration – In spite of this settled position, revenue authorities “are committing the same mistake knowingly or unknowingly” – Court proceeded to “once again explain the entire process of law” – Case-lawanalysed.[PARA-28, 34 to 38]

Bombay Land Revenue Code, 1879 – S. 135C, 135D – Specific Relief Act, 1963 – S. 31 – clarification and effecting of mutation of sale entry in revenue record – application for – held, once sale deed has been executed in favour of applicant, by virtue of provisions contained in S. 135C of the Code it is obligatory on part of Revenue Authorities to effect necessary entries in revenue record mutating name of applicant – in such situation it is not necessary for Revenue Authorities to follow procedure prescribed in S. 135D of the Code – if there is any dispute with regard to mutation entry disputing party shall approach competent Civil Court for avoiding such transaction as provided in S. 31 of Specific Relief Act – Revenue Authority cannot dispute validity of transaction in RTS proceedings – in aforesaid view, in cancellation of kachcha entry refusal to make final entry by respondent 2 and 3 is not justified – therefore, respondents 2 and 3 directed to mutate entry in revenue record in favour of petitioner in respect of properties sold to him and order of confirmation of sale and in respect of which sale deeds had already been executed by Official Liquidator – application disposed of. [PARA-12, 13, 14]

It has been held by the Hon’ble Court in para- 9 that, the Collector was required to decide application u/s. 65 of the Code – collector is not to go into question of title of the land and is expected to decide the application within reasonable time period available to him under the provision of Section 65 and it is not open to him to pass unreasonable long time on the grounds not available in law. It has been further held that, to keep application pending for long time just to ascertain from Mamlatdar whether any appeal or revision is filed against decree passed by the Civil Court where the State was not party is certainly no ground available in law for not deciding the application.– held, quashed the impugned order passed by the Collector. (para-9, 10, 11, 12, 13)

Applicant applied before the authority to convert the land to Non-agriculture use – Objection filed by the respondent regarding for mutating the name of the appellant in the revenue record pursuant to transaction of sale of land in question purchased by the appellant – dispute with regard to mutation entry is pending therefore no permission should be granted in favor of the appellant to convert the land into Non-agricultural use. – objection overruled – Appellant once again filed application for N.A – respondent filed objection before T.D.O. – No decision taken by the authority upon the application for N.A. – Writ of mandamus for directing authority to grant N.A. permission has been filed by the appellant – subsequently the petition was came to be dismissed by the Single Judge- Hence, filed Letters Patent Appeal – whereas, it was observed that, T.D.O. is obliged to pass necessary orders under Section 65 of the Code one way or the other – further observed that, TDO may either reject or grant application, but it cannot be said that, since Civil Suit is pending and objections have been raised no order would be passed on the application preferred by the appellant. It was further observed that, TDO could not have order to filed the application for non-agricultural permission without passing any order. – Hence, quashed the order of the Single Judge and subsequently directed to the TDO to hear all the concerned parties and to pass necessary order according to law.

Wherein it has been held in para-7 of the judgment that, except the claim that the petitioner has got agreement to sale, there is no other right or interest claimed by the petitioner for the land in question. Further held that, pending Civil suit in court for execution of the sale deed in favor of the petitioner and for setting aside the sale deed which is already executed in favor of the respondent no. 15, the petitioner cannot be said to have any right or interest in the land in question for which N.A. permission is granted by the Collector. Further, after observing the legal provisions as well as the decision rendered Hon’ble High Court, it held been held in para-9 that, agreement to sale holder has got no interest in the land against third party till he gets any order from the competent Civil Court recognizing hisright in the land for which the Banakhatis executed.