NO WORSHIP IN WONDER: Supreme Court bans outsiders from offering prayer at mosque in TajMahal 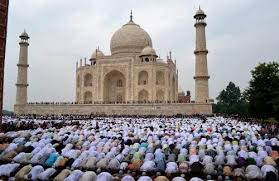 The Supreme Court on Monday dismissed a plea challenging the Agra authority’s order debarring non-residents of the city from offering Friday prayers at a mosque in the Taj Mahal complex. A bench of justices AK Sikri and Ashok Bhushan said the monument was one of the Seven Wonders of the World and it cannot be decimated.

SC observed that there were several other mosques in Agra and the non-residents could offer the customary prayers there. Taj Mahal is one of the Seven Wonders of the World and we do not want this to decimate and dismissed the plea.

The bench was hearing the PIL filed by Syed Ibrahim Hussain Zaidi, president of the Taj Mahal Masjid Management Committee, who was challenging a January 24 order of Agra’s additional district magistrate (city) barring non-residents from offering Friday prayers in the mosque on the grounds of security of Taj Mahal.

Zaidi’s lawyer contended that the executive order discriminated between residents and non-residents, and said that everyone should be permitted to go inside the mosque and offer prayers. The petitioner said people visit Agra throughout the year and the January 24 order was “illegal, arbitrary and unconstitutional”.

“The administrative action by way of impugned order dated January 24, 2018 of the respondent making illegal and arbitrary classification between the residents and non-residents on the question of security of the monument is not based on any intelligible or rational principles and being wholly unrelated to the objects sought be achieved. Hence, the said impugned order is liable to be struck down,” the plea said. It claimed that by virtue of the January 24 order, equal persons have been treated unequally without any reasonableness.

It pleaded that when local residents of the city were allowed to enter the mosque after being frisked by security agencies to offer their prayers, the non-residents could also be permitted to go there in the same manner. It mentioned that all the affairs in respect of Taj Mahal complex have been managed, controlled and supervised by the Archaeological Survey of India while seeking a stay on the operation of the order.

The top court also turned down the petitioner’s plea to move the Allahabad high court and states that we are not entertaining this plea, and added that there are other mosques also, they can offer their prayers there. Such issues should not be raised under Article (32) of the Constitution (violation of fundamental rights), the bench said.

A separate bench of the top court is hearing a PIL pertaining to the protection and preservation of the Mughal-era mausoleum. During the last hearing, the court had asked the central and the Uttar Pradesh governments to hire external experts to restore the beauty of Taj Mahal after it was told that the monument had become yellow, and was now turning brown and green.