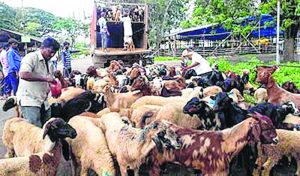 The issue of animal sacrifice is sensitive in the Indian context. While the law prohibits the public slaughter of animals during religious sacrifices, what is practiced is a far cry from what the law states.

Public slaughter of animals in a violation of Prevention of Cruelty to Animals act. Any slaughter that takes place in municipal corporation limits in any state of India, has to take place in a designated slaughter house. Each slaughter house and the number of animals sacrificed should be in proportion to the population in the region.

According to Rule 3, of Prevention of Cruelty to Animals, (Slaughterhouse) Rules, 2001 and Chapter 4, Food Safety and Standards Regulations, 2011, “No animal (including chickens) can be slaughtered in any place other than a slaughterhouse.’’ Sick or pregnant animals shall not be slaughtered.

Prevention of Cruelty to Animals (Slaughter House) Rules, 2001: Animals not to be slaughtered except in recognised or licensed houses subject to following conditions that-

(1) No person shall slaughter any animal within a municipal area except in a slaughter house recognised or licensed by the concerned authority empowered under the law for the time being in force to do so.

(2) No animal which – (i) is pregnant, or (ii) has an offspring less than three months old, or (iii) is under the age of three months or (iv) has not been certified by a veterinary doctor that it is in a fit condition to be slaughtered.

(3) The municipal or other local authority specified by the Central Government for this purpose shall, having regard to the capacity of the slaughter house and the requirement of the local population of the area in which a slaughter house is situated, determine the maximum number of animals that may be slaughtered in a day.

Occasionally on Eid – Al- Adha, the demand for meat is great and existing slaughter houses may not be able to meet the demand. Resulting it people slaughter animals in their neighbourhood. While hygiene is the primary concern, disposal of animal waste after a huge number of sacrifices is the real challenge for civic authorities. Additionally it is the discomforting to many citizens at the sight of animal waste and blood in public spaces. While the law states that every slaughter house has to have a valid license, transportation facility etc. and animal slaughter has to take place in designated places.