SC Refuses Complete Banned On Sale Of Firecrackers; PESO Directed to Review the Clinical Composition of Firecrackers, Station House Officer of Concerned Police Station to be Liable Personally for Violation. 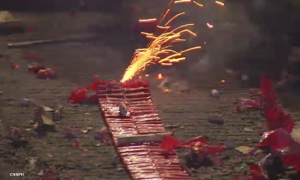 The Supreme Court has ruled against imposing complete ban on firecrackers but has said that only less polluting green crackers can be sold, that too only through licensed traders. The Court has banned online sale of firecrackers, restraining e-commerce websites from carrying out its sale.

The Court also fixed duration for bursting of crackers. On the day of Diwali and other religious festivals, it will be between 8 PM and 10 PM. On Christmas Eve and New Year, it will be allowed only between 11.45 PM and 12.45 AM. The Court has also ordered that crackers can be burst only in designated areas.